And so the reminiscing begins...

I threatened in my last post that I'd start reviewing our life aboard this boat and thought I better honour that promise. This post comes from a blog I wrote before this one was created specifically for our boat life. We were on our way back from having our hull blackened at Tooley's Boatyard in Banbury, July 24th 2006.

We collected the tin can on Saturday morning. It now has a lovely shiny black hull. My parents came with us to help crew for our journey back. They are gluttons for punishment.

We had not long left Banbury when the sky began to darken: 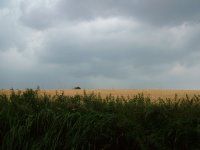 We made it as far as Grant's Lock (only 2 miles from Tooley's) before the Gods decided to scare the living daylights out of us all.
First, came the odd rumble of thunder and a flash or so of lightning. We were safe, it was far in the distance. Then the odd spot of rain fell. Before we got into the lock the world looked a little dark around the edges: 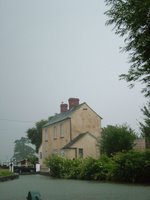 As soon as we entered the lock, and before we knew what was happening, the storm was upon us. I had to cover my ears with my hands because the thunder was so loud. Fork lighning grounded in the fields and trees around us and my mum ran around informing us that when it strikes the windlass whoever was holding it would die. A game of Hot Potato anyone?
The more cowardly sensible among us took shelter (already sodden) whilst those braver worked hard to get us out of the lock alive. Rob, who loves a good storm, was up for the challenge. 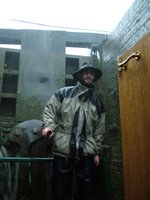 And scared the bejeebees out of me when he ran off with the windlass just as lightning struck somewhere a little too close by. Whilst mum and dad were discussing how bright and near it must have been, I was running around like a headless chicken shouting "WHERE'S ROB? WHERE'S ROB? OHMYGOD, THE WINDLASS KILLED HIM" just as he calmly walked in and declared that the lock was open and we were ready to go. 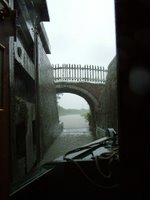 There was nothing that we could except find a place to moor and wait for the storm to pass.
Email ThisBlogThis!Share to TwitterShare to FacebookShare to Pinterest

valonia
Valonia lives with her Morris dancing husband and cat-who-thinks-she's-human on a narrowboat on the Thames. She makes boating look difficult and constantly proves that gravity favours the unco-ordinated.

Our Other Boat, The Gabble Ratchet. 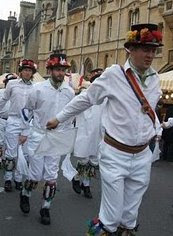